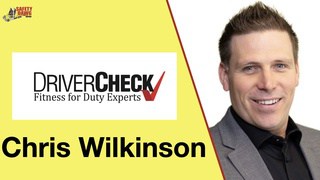 Chris Wilkinson, Driver Check (0s):
In the social contract have trust is that we believe, and we trust that all people driving on the same road is known as us are fit to operate.

Chris Harris, Safety Dawg (11s):
And that is Chris Wilkinson from DriverCheck. And not only is he talking about the social contract have trust that we all have while driving on our roads in our highways, we are also talking about cognitive testing and how it can reduce the risk of a fleet from having a crash. So if that's something that interests you stay tuned now let's get on with the Dawg On It Trucking Pawedcast

Chris Harris, Safety Dawg (40s):
Welcome to the Dawg On It Trucking Pawedcast I'm your host, Chris Harris Safety Dawg and When it comes to trucking safety. The dawg is on it, please. If you would show your appreciation for the podcast by leaving a thumbs up a comment or a rating, it will help me so much. Well, thank you very much. I appreciate you now. Lets get all of that.

Chris Harris, Safety Dawg (1m 13s):
So we got to Chris's on the show. This will be confusing me

Chris Harris, Safety Dawg (1m 19s):
Mr. Wilkinson welcome to the Dawg On It Trucking Pawedcast and we are here talking about cognitive testing, something that Jeremy brought up and I know nothing about, so it's awesome to have you on the show to explain this to both me and the viewers Chris come on in and tell us a little bit about yourself and how did you land at DriverCheck

Chris Wilkinson, Driver Check (1m 51s):
All right, so it's great to be here. Thank you so much is the first time it might be in the allowed on this show. So I take that as a privilege I've worked with DriverCheck now for just about three and a half years. Been in the fitness for duty drug and alcohol testing industry though for about eight. And I came over to DriverCheck when they bought the company I was working for So I came over with him with an acquisition. I was competing against DriverCheck before, but now I'm very happy to be part of this, a wonderful team.

Chris Wilkinson, Driver Check (2m 21s):
So let's say that's how I got into being a part of DriverCheck and I'm my official title at DriverCheck is a program consultant, which is a sales account management and, and then also other project management, like the cognitive testing program, we are going to talk today. Yeah.

Chris Harris, Safety Dawg (2m 38s):
So let's not move but bit by bit yet. And I don't edit these things out, but let's get right into the Cognitive Testing because I don't know anything about it. Why would a trucking company, well explain first what it is.

Chris Wilkinson, Driver Check (2m 58s):
All right. So cognitive assessments for commercial Drivers is just, one is one of three types of assessments that should be conducted on commercial driver's when they're being qualified for their license, they look at the CC MTA medical standards. So the Canadian council motor or transportation medical standards looks at sensory motor and cognitive function. As there are three areas to determine whether or not somebody who's fit to operate and or if somebody goes for their license, they would, they typically would get their sensory and motor or assessed.

Chris Wilkinson, Driver Check (3m 37s):
But a cognitive functions may be missed because they're are a little bit harder to identify.

Chris Wilkinson, Driver Check (3m 49s):
All under the law and behaviors, reaction, time, peripheral vision, short term, long term memory. So everything that you do when you're driving a vehicle and it falls into what you are, how you use it with your cognition, we take advantage of the fact that we have a healthy cognition while we do, and then we're operating even our own personal vehicle, our cognition as being overwhelmed, but we're able to balance that overwhelmed cognitive functions by overcompensating for certain things.

Chris Wilkinson, Driver Check (4m 21s):
If there's a lot of stimuli going on while we're driving, we can overcome that stimuli by focusing on what's necessary to be safe. If there's bad weather, then we're focusing harder on a safe driving, our speed, gauging our distance. So we can do that. And we can react naturally to the elements and two, the environment, loud music, playing kids, screaming in the background, trying to tune that out while we were, while we were driving. Now, if somebody does not have a healthy cognition, they start to become overwhelmed by all that stimulus that come in and it puts somebody at a very high risk situation.

Chris Wilkinson, Driver Check (5m 1s):
So that's, that's where the cognitive functions comes into play, where most people do have healthy cognition or can be affected in minor ways. But there are still our individuals who are not knowing that they have significant cognitive deficits and they are operating on the road. And so this program is designed to help identify, mitigate those risks, but then also to help people get maybe the medical treatment they need by identifying these underlying medical issues and then getting them back to work as a healthy contributor to the company.

Chris Harris, Safety Dawg (5m 34s):
Is this a way to root out old? Drivers like me now?

Chris Wilkinson, Driver Check (5m 39s):
Not at all. Thank you. Good question. No, the program has not geared towards a specific group of people. The idea is that everybody at any age can have cognitive decline. There is a natural progression starting at age 26 on where we start having this actual natural decline have cognitive functions till you are older, but the program is an age norm devaluation. So we're not assessing somebody's based on age. If your 70, you are going to be assessed against another seven year old as a healthy cognitive function.

Chris Wilkinson, Driver Check (6m 14s):
If you're 30, you are going to be assessed against another 30 year old who has healthy cognitive assessments function. So it's age norms in that sense, that natural decline that is taken into consideration. And with the science that backs this program years of research research was first started out at the university of Alberta. It may be able to develop a science to support the fact that if you are a screening high and I have a risk that they're is maybe something a not diagnosing, but maybe identified that there, maybe it is concerned with the driver could then be removed temporarily from work identified, go there for the doctor, identify that they might have a underlying medical condition and hopefully get that resolved and come back to work and be safe.

Chris Wilkinson, Driver Check (7m 9s):
But the focus has Safety yeah, absolutely. When would a company use it?

Chris Wilkinson, Driver Check (7m 18s):
So that it can be used at different parts of the employment. So it can be either a prescreening tool because of this tool looks at it, the functional capabilities have a driver, the bonafide occupational requirements of the driver to be able to safely operate a vehicle. This is a qualifying tool to see if somebody is even qualified to continue on through the recruiting process.

Questions? What Questions Should Truck Driver Applicants Be Asking The Recruiter?

For Your Trucks Breakdown Unexpectedly? Do You Have Trouble Keeping Track Of Maintenance?

Safety, Compliance, and Insurance in the Trucking Industry

The Idling Epidemic, It’s Not What You Think. With Ron Zima

Supply Chain & Driver Retention, What do they have to do with each other?

Drugs and Alcohol, Clearinghouse, and Testing

How To Setup A “Mentorship In Trucking” Program?

30. The Trucking Network, Naveen Nav and Her Giant Pivot Due To COVID

Chris Harris, Safety Dawg (2s):It is a great pleasure today to invite Naveen Nav, Naveen of Th e Trucking Network on to Dawg On-It Trucking Pawedcast. Let me bring the bring in Naveen. Welcome to the dog on a trucking podcast. How are youNaveen Nav, The Trucking Network (TTN) (21s):Doing great. Thank you, Chris, for inviting me in your podcast. ...