USA, Personal Conveyance Rule, Is It Trouble for Canadians??? 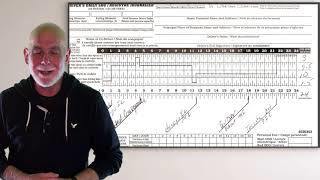 Hey, it's Chris Safety Dawg here. PC, personal conveyance for Canadian truck drivers in the US can you use it legally? That and more when we come right back.

First of all, condense in the US and Canadians use it well in the US legally, let me tell you, there has been a number of Canadian truck drivers put out a service because they use the American personal conveyance rule while in the U S how does that happen? Let's talk about it. The easiest way to explain it is a trip from Chicago, from Toronto to Chicago. That's about a 10-hour drive. You get offloaded in Chicago and you hop into your bunk while you're at the shipper or the receivers yard and you're in your bunk for both three hours but not comes on the door three hours into your arrest and the receiver says, Hey, we're locking up the gate. You got to leave. You think, Hey, not a problem. I know the PC rule in the States, there's a Truckstop. It's only about 30 minutes away. It's the nearest safe location that I can go and park. So I'll just use PC drive down to that. Truckstop park there and all is good and you do. And just like the logbook that's right there, you record it as PC in the States, you're perfectly legal, you leave Chicago, you come back, you hit the border.

And in Windsor, you get inspected and put out a service. Why are you putting on a service? Do you see what it says about sleeper berth? It says only nine and a half hours, nine and a half hours. I'm, of course in Canada we need 10 hours, two hours in the sleeper berth plus whatever else. Minimum of two plus two equal at least 10 so now you're put out of service, you get fined, you're late, it's inconvenient. And you know what else?

So how do you avoid it? Well, if you say I'm splitting my sleeper berth and you make sure your sleeper berth number is not nine and a half, in this case, you would have to go into the bunk for an extra half hour there to complete. Because as it shows on the log there, it's three hours are the, is the first period, so you want second the second period to be at least seven hours. So you do lose your half-hour there but now you become legal when you're in Canada.

This is only really important when your last 10-hour break in the States is immediately before coming back to Canada. If you were to do the same thing in California and PC, by the time you get back to Canada, your legal or likely legal because you've had several 10-hour rest breaks since that PC use. But if you use PC immediately in that 10-hour break and then hit the Canadian border, that's where I believe you are having a problem. So you need to know what the Canadian split sleeper berth rules are in order to do it all legally. Make sure if you're going to use PC on your 10-hour break immediately prior to coming back into Canada, that on your sleeper-berth line it will show at least 10 hours and this is a real problem because ELBs are not going to help you.

Your ELD is going to show that your legal wall in the States, it doesn't understand what happens when you cross the border. So you as the driver, you got to think about it and make up for the lack of PC or the lack of the ELD knowing the rules. All right? Please use it sparingly. Be careful out there. It's a heck of a way to get a ticket. All right? So I just want you to think about, please PC in the States. You gotta be careful. Thanks so much. Safety dogs out the end. Don't forget to like and subscribe to the safety dawg channel.Okay?Keeping it Safety Dawg Simple!

CDL Truck Driver Files What is Needed, How to Audit

Over The Road, 25 Years In The Making!

Guest Article from Glenn Caldwell.Glenn is the Vice President Corporate DevelopmentHealthy Trucker / NAL Insurance IncThe majority of fleets in Ontario have allowed their Owner/Operators to opt out of WSIB and purchase a private alternative that covers them for accidental injuries on and off the job, 24 hours/7 days a week. It’s important to understand ...